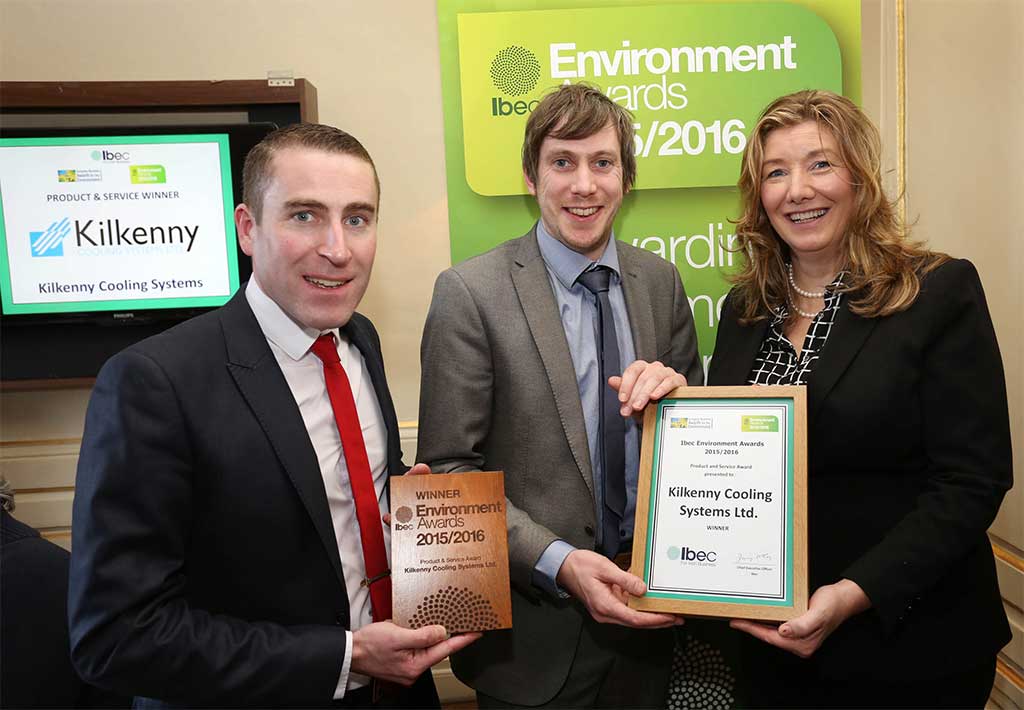 The Kilkenny VS beer cooling system has won the ‘Best Product or Service’ category at the 2016 Environment Awards.

Directors from IBEC, Enterprise Ireland, the Irish Planning Institute, together with private consultants and persons from the world of law and academia including DCU School of Business and Arthur Cox Solicitors judged the entries for the national competition. Marks were awarded for energy saving, sustainability, payback duration, and business viability.

Kilkenny Cooling Systems made it to the final of the competition, and were joined by other industry leaders such as Intel, GSK, Roadstone, and ABP at the awards ceremony on Friday 15th of January. In the ‘Best Product or Service’ category, the companies which made it to the final were Kilkenny Cooling Systems, multinationals Baxter Healthcare and construction giants Roadstone. Despite the high calibre of their competition in this category, Kilkenny Cooling Systems were awarded first place for their Kilkenny VS Beer Cooler – a brand new beer cooling system design which is proven to offer significant energy savings over the current industry best practice.

The Kilkenny VS Beer Cooler was designed and developed in Kilkenny, and has completed a highly successful prototyping stage. The product was also shortlisted for the Innovation category in the SEAI Awards in November last year and is due to launch in February 2016.

The competition is open to all companies, irrespective of their size or country of origin. Award categories cover management practices, products and services, processes that contribute to economic and social development without harming the environment. Companies must succeed in national award schemes (in Ireland the IBEC Environment Awards) before they can participate in the European level competition, which is held every two years. IBEC runs the Irish stage of the awards every two years also.

“We are absolutely delighted with this win, especially given the standard of our competition and the status of those judging the entries. It is such a major achievement for us and a significant seal of approval for our new beer cooler offering. Not only does it show recognition to all those in the company that put in the hard work to make this happen, from a sales point of view it really gives the product the credibility that it deserves – and that’s something that we’re sure will help make it a great success. We couldn’t be happier”